School bus fleets have specific safety-related needs that other mobile video solution applications like police or taxi may not have. One need in specific is the danger presented to students who must enter and exit the bus on often busy streets.

Recently the demand for higher resolution images or video for incidents relating to school bus stop arm violations has been received and more and more districts are looking into a workable solution that can help reduce the number of school bus crossing gate violations that might endanger the children getting on or off the bus. The solution of choice has been the employment of an external school bus stop-arm violation camera that can then capture the violating vehicle license plate for possible citation for the offense.

School bus stop-arm violation cameras or stop-arm safety cameras are both loved and hated, even though they do offer the ability to help reduce the number of incidents of unlawful passing of school buses by those who are ignorant, inattentive, or apathetic to the laws regarding the passing of loading or unloading school buses, by increasing awareness.

Critics of these high priced school bus stop-arm violation camera solutions have claimed the use of these systems has less to do with child safety and more to do with taking advantage of drivers due to widespread ignorance of the law, who are now targeted as a revenue stream ready to be tapped via the school bus passing violation citation.
Some common concerns expressed are:

Those who have created and marketed bus stop-sign camera & stop-arm safety camera products have done so in a way that exposes the purchaser and user of bus crossing arm camera systems to claims of greed for citation revenue and prejudice of revenue over child safety, as it is perceived that in many cases some value the bus passing violation camera citation revenue stream more than the children in the bus who are protected to a degree by a lower cost much lower resolution mobile video solution.

Children on the bus deserve the same consideration and protection as those who are outside the bus. Critics of these high priced Stop Arm school bus crossing gate camera solutions might not have as much to criticize if the Stop Arm Camera citation revenue was Not Shared with an outside Third Party, and the High Definition technology that was generating revenue on the outside of the bus was also in use inside the bus protecting children from assault, battery, rape, bullying and accusations of driver abuse. At that point, the claim that both systems are for the safety of the children, no preference on revenue or off bus versus on bus child safety would be evident.

There are 2 business models for Stop Arm Crossing Violation Cameras

Shared Revenue business model-
In this model, a benevolent benefactor provides the product hardware gratis, at no cost to the district and maintains the operation, in exchange for a 50% - 70% share of the revenue stream. This is the business model viewed as predatory and more likely to be criticized by those who claim this is just about money, as the one providing the service is greatly enriched with citation fines robust revenue stream, while the district is left with a trickle of revenue.

District Operated business model-
In this model, there is no Third Party bleeding revenue from the district citations generated so there is less animosity generated and far more revenue to the district as it is not diverted to a Third Party.

There are 3 very different video solutions for Stop Arm Violations

1.    Analog D1 Camera Budget Solutions
In this solution, you add additional CCTV camera(s) to the outside of a bus.
The additional camera(s) cost is $300-$500 more than a standard interior camera normally inside the bus system and can record vehicles passing the bus in violation of the law.

This bus stop-arm camera system requires a Telephoto CCTV camera lens of 16mm - 30mm for "Depth of Field" required for low-resolution CCTV cameras images to provide a readable car tag. The downside is such a tight lens picture that you cannot see most other details of the car or driver. Some of the more effective Analog Stop Arm solutions we have worked with require 5-7 cameras outside the bus to capture sufficient information for citation fines to be admissible as evidence in some courts. Those systems can cost between $3,300 - $7,000 per bus for their school bus stop-arm Violation camera solution, and these systems were only provided with a shared revenue business model.

2.    Hybrid 720P-AHD DVR Camera Solutions (SD4HW)
In this solution, you add two HD 720P cameras with a 12mm or longer lens to a 4-channel DVR to get a long-range capture of a car license plate and driver's face by mounting the cameras outside the bus facing forward and backward.

This system can now offer a High Definition stop-arm camera for the exterior for Stop Arm Violations and can record vehicles passing the bus in violation of the law.
This solution satisfies the need for the high definition to capture car license plates for citations with a Stop Arm bus-crossing camera solution in the name of enhanced child safety.

This is the solution that exposes the district to accusations of prejudice against off-bus child safety versus on-bus child safety, as the much higher cost, higher resolution cameras are monitoring outside the bus, while the low-cost low-resolution cameras monitor the children still on the bus. The same 720P-AHD higher level of technology could also be put to use inside the bus where their application could be used to document a widespread problem that threatens as many as 12,000,000 children daily (12 Million Children Experience Bus Bullying Daily.~Kameron Institute) with the same high definition 720P-AHD pupil transportation security surveillance camera systems to combat the epidemic of school bus bullying.

The same DVR can be connected to 2 interior cameras monitoring the students with the same high definition 720P-AHD quality to provide a balanced and effective solution for both the inside and the outside of the bus.

The additional charge for the Full HD DVR cost may range from $100-$200 more than a standard 4-channel D1 DVR. Unlike other in-bus video systems, this system can produce Stop Arm violation evidence that can lead to a citation fine of several hundred dollars per violation. When the average cost of citations I am aware of is $300 per violation, simple math could provide a Return on investment of the full cost of the system within the first month depending on citation fines collected.

This system can now offer High Definition cameras for interior and exterior for Stop Arm Violations and can record vehicles passing the bus in violation of the law. The same HD1080P higher level of technology will be used to document in HD a widespread problem that threatens as many as 12,000,000 children daily (12 Million Children Experience Bus Bullying Daily.~Kameron Institute)  school bus bullying.

Additional benefits of having a true High Definition 4-channel mobile video surveillance solution is you can now offer a forward-facing Stop Arm Camera and a Rear-facing Stop Arm Camera to satisfy the legal requirements of those states who require the Stop Arm Camera citation to include an image of the driver of the vehicle. Keep in mind, when a vehicle passes from the rear of the bus you capture the vehicle tag or license plate you completely miss the opportunity to prove who is was driving the vehicle.

Some low-resolution school bus stop-arm violation camera solutions employ 5 - 7 old technology Analog bus stop cameras on the outside of the bus in a box all aimed at specific target zones or travel lanes for cars passing the bus. All 7 cameras can be replaced with 2 SDI cameras: one facing front and one facing rear that can not only capture the car tag of the vehicle passing the bus but can also capture the driver's image to help document they were the actual driver of the vehicle. Again the ability to zoom into the image and still have a clear image will provide a reduction in cost by requiring fewer bus crossing-arm cameras to provide the same coverage capabilities.

To support a citation to a driver for breaking the Stop Arm laws of the state the threshold of evidence required varies greatly. While some states permit citations to be issued with little less than an image depicting the rear of a speeding vehicle, others may require far more.  Some may require you to prove the actual vehicle owner was the guilty party behind the wheel, in this case, the single Stop Arm Camera may be about useless when it gets to litigation. It is strongly recommended before investing in any Stop Arm Camera System you check on the legal requirements for Stop Arm Violation citations in your state or the local jurisdiction.

It would be a waste of school district, state, or federal grant funding to pay several hundred more per bus video system for a Stop Arm Camera solution that may not even be admissible as evidence in your state.

Dual camera Stop Arm Violation mobile video solutions can provide legal video evidence when required by the state of who was operating the vehicle, who else might have been in the vehicle, and what they might have been doing that could have caused them to become so distracted they did not notice a 9-foot wide vehicle standing almost 10 feet high with flashing Red, Amber and or strobe lights often covered front to backside to side with white conspicuity reflective safety tape.

When you are taking steps to stop unlawful passing of buses with a stop-arm safety camera it makes sense to provide law enforcement with as much evidence as possible to prevent their valued efforts at making a case for the school bus stop-arm violation, only to have reasonable doubts on who was the driver causing the case to be dismissed due to lack of evidence or inability to prove the suspect was the guilty party behind the wheel of their vehicle. Verify with your state before you invest in a Stop Arm Crossing Violation Camera system that may not meet the state's requirements.

As fines and penalties for School Bus Stop Arm Violations can be considerable, including loss of driving privileges or jail time for repeat offenses, those charged with these citations will often contract legal representation to have the charges dismissed and in these cases especially the more usable video evidence available the better. 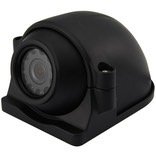 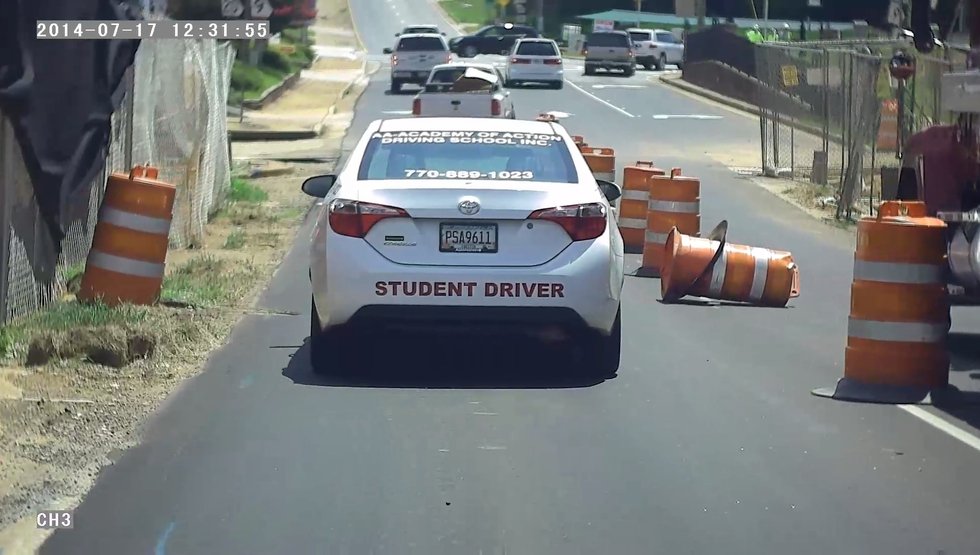 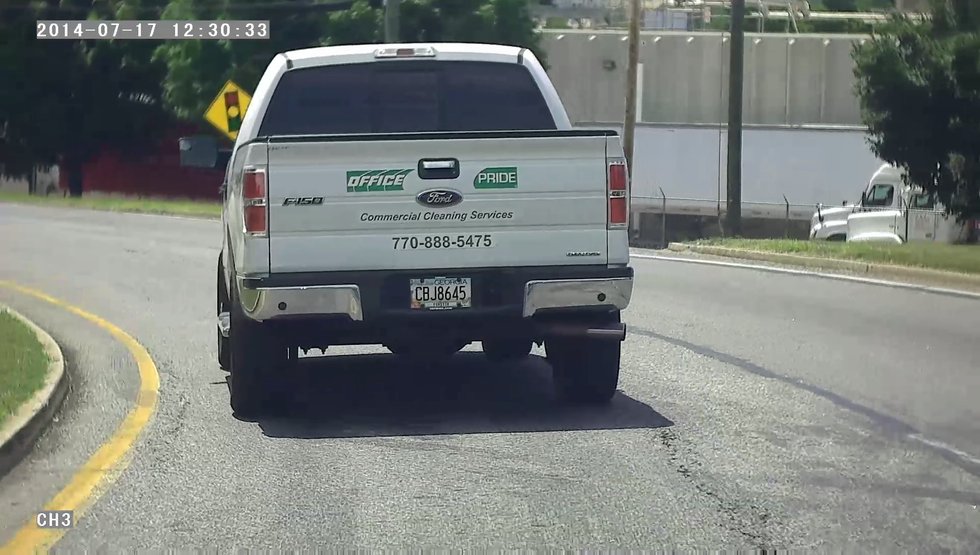