When entrusted with the safety of the world's most precious cargo, can you afford not to have a proven mechanism to document with dispassionate reason what actions or events may have occurred on a government-operated or sanctioned pupil vehicle?

The burden of proof in criminal and civil lawsuits can often be satisfied with a simple video clip of the incident by a non-biased expert witness in the form of a scientific recording device.

Below are some of the highlights of hatred, madness, violence, and child abuse that American school children are subjected to demonstrate why bus video systems should be on every school bus.

Note: Some of these videos have been pulled from YOUTUBE, due to copyright issues or PC pressure, but when we locate them online we will relink them as it is truly disturbing to witness the level of violence and depravity demonstrated on the bus against children. Innocent children deserve better than the level of neglect this by those charged with their safety. We can as a society do much better than subject innocent children to repeat offender sociopaths regardless of their age.

The above bus video is of a violent thug assaulting a helpless female driver strapped into her seat just trying to get the kids transported safely. Punks like this should be in cages where they do not endanger the lives of children looking for an education. Decades of coddling these predators have proven a complete waste of time, money, and concern for their future, it is time to protect the innocent and punish the guilty.

Uploaded by AssociatedPress on Sep 3, 2009

"A school bus security video shows students scurrying to exit after a 14-year-old girl drew a semiautomatic handgun from her backpack in Yazoo City, Miss. Officials say there were 22 students on board the bus, ranging in age from 5-to 18. (Sept 3)"

In some cases, the best a competent, trained, and quick-thinking bus driver can do is to try to get the children off the bus and away from a clear threat like a gun-wielding teenage girl.  The fact that there is so little discipline from broken homes and dysfunctional families, so little self-respect, and for many no hope of a better future, makes the reality of this scenario more common in the future. We are leaving this world to our children,  in a much darker state than that which our parents provided us, and in many ways condemning them to despair.

Racial Hatred & Violence
Racial violence and other child victim in that double standard of accountability and political correctness create a "Hell on Earth" for so many of our children.

This Atlanta bus video shows that not only did students engage in this racial violence and criminal activity, but a parent of one of them also boarded the bus and allegedly choked and tried to kill a child, even threatening to kill her in front of the bus video camera.

The bus driver who is trained, authorized, compensated, and entrusted to protect these children and look out for them seemed to do nothing to stop this.

Each morning we send our children into this jungle of hate, violence, and apathy and hope for the best....they deserve so much better than what we provide them, as a society we have failed them so miserably. 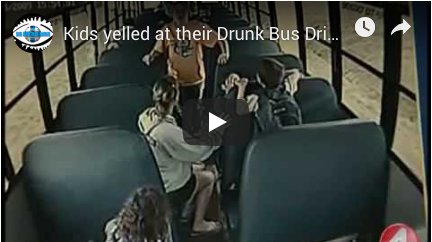 Bus Video systems are most often installed to record problems and actions by the students, but on occasion, a driver variable can create a dangerous situation like what seems to be recorded in this bus video clip. Apparently, the driver is drunk,  under the influence of some prescription medication or drug. The driver is so out of it that the children are trying to tell the driver she has passed the turns, and the driver seems incoherent.

The bus in some scenes is rolling backward down a hill and the children are yelling put on the brakes, turn off the bus and let them out. 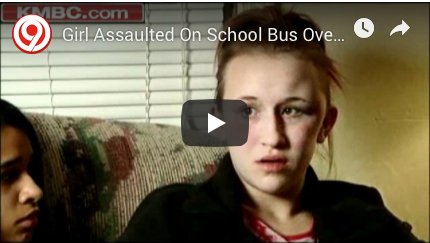 A teenage girl is beaten on a school bus in Sedalia over a T-shirt. KMBC's Martin Augustine reports.

"A student of Dayton View Academy in Ohio was punished for turning in students who were having sex on a school bus. Ana Kasparian and Cenk Uygur discuss."

The sad reality is that some girls are making more on the way to school some days than they do when they are working part-time jobs.

A school in an adjoining state found out the hard way that a girl had snuck onto a male team bus for an out-of-town away game. By the time the bus returned a very large number of the team had engaged in various sexual acts with this underage girl over the several-hour trip. The end result we learned was Statutory Rape charges for most of the entire team and shame and humiliation of the district in the public eyes where it was a media feeding frenzy when we arrived on-site to install bus video cameras in each bus with night vision cameras to prevent this from happening.

I have learned you cannot stop children from doing really stupid things, but you can certainly ensure they will not get away with it, so maybe they are less likely to do so in the first place,  by documenting what they do on school property, and that includes the bus.

This level of violent racially motivated hate-driven assaults and criminal abuse are not only happening on the "Yellow" buses, and the number of incidents of racial violence is often not being charged as hate crimes.

Hate-filled predators and sociopaths are now targeting their victims on public transportation where there is nowhere to run and often none to care.

Racial violence and the double standard of accountability and political correctness create a "Hell on Earth" for so many of us.

MLK had a dream, filled with the promise of what could be, and some are turning it into a nightmare, with so few willing to take a stand for the love, tolerance, and compassion that MLK was advocating. A great man's vision and legacy are being dishonored daily.

Transit bus video camera surveillance systems would at least provide documentation of the racial assault that might enable police to apprehend these gutless punks, so they could be held accountable for their hate-filled violence.
For less than the cost of this innocent victim's medical care, this bus could have a high-resolution multi-camera bus video surveillance system in place.

Distracted drivers have a 24 times higher incidence of accidents than those who are not distracted. The additional bus video camera that can now be installed on a bus that faces the driver to document their activities, can provide a constant reminder for the driver to "do the right thing". MVS now offers a Cell Phone Detection system that alerts the supervisors and Operations Manager as soon as the driver activates their cell phone in the driving seat area.

"Two Darlington, South Carolina elementary school bus aides Tomeka Self  (pictured in blue)and Rosanna Dudley (pictured in white) were arrested and charged with assault and battery for repeatedly striking a 10-year-old special needs child who could not speak. The incident was recorded on camera, reports Carolina Live.

The St. John Elementary School student sat defenselessly in his seat weeping as the ruffians struggled to put on his safety harness. The child never lashed out at the women. The disturbing minute and a half long video show them hitting the little boy on his body, slapping him on the face, pushing his head down, and yelling at him to “hush.”
Unbelievable, intolerable, and inexcusable for this to happen on a school bus, and worse to a special needs child at the hands of 2 representatives of the district who are supposed to be vetted, trained, and charged with the safety of these children. The lack of compassion, and rough treatment of this small disabled child, would enrage the ASPCA if this were done to a dog or cat. If you do not have the patience and compassion to work with special needs children then do not seek employment in a school system as a driver or assistant.

Those who believe children are safe from assault, bullying, and battery on a school bus are floating far down the river of denial without a paddle.

Apathetic disconcern for the well being of not only the children and the driver /monitors should be replaced with a proven mechanism that can document incidents of bullying, harassment, threats of death so that sociopathic cockroaches with no regard for others can be separated from those children willing to abide civil society.