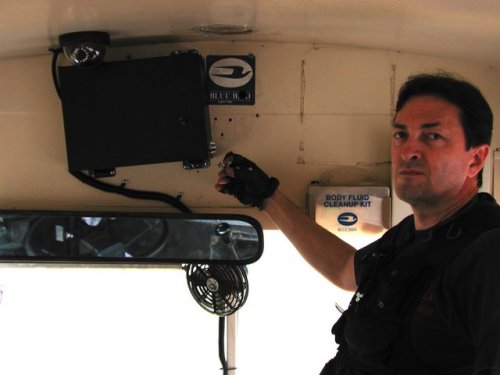 Previous system was installed with aluminum screws. It is a wonder only 4 aluminum screws did not break off and permit this heavy lock box to fall. Please only use heavy gauge steel screws on these installs, they cost more but they rarely fail. While this ATX school bus camera or vehicle camera surveillance system DVR lock box was small at the time it was produced it is now one of the largest  in comparison to the new generation of the school bus video or vehicle camera systems DVRs now designated the "SD4m" mini series, which is now about 1/8 the size of the pictured ATX DVR lockbox.  Whether it involves school bus cameras, digital bus video cameras, vehicle camera, mobile video surveillance systems, digital in-car video camera, in-car camera, bus camera surveillance it is always best to invest in 100% Solid State digital like the SD4m or SD4 series, small DVR mountable under dash where it will not present a hazard to driver or children.
Return to Gallery Page