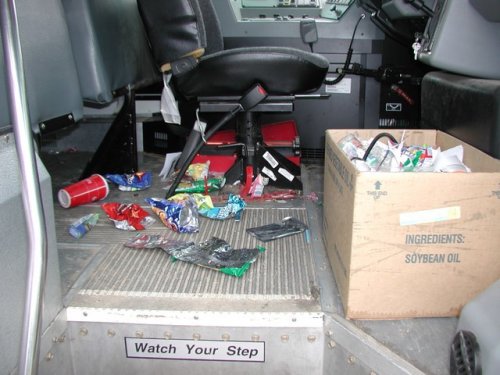 Everyone who performs installs over a long period has their horror stories. I have a top 10 list and at the very top was a district  we were asked to install in about 5 years ago.
When I entered the first bus, I noticed food wrappers and piles of garbage all over the bus. The smell of urine was strong as I stood near the drivers seat, so I figured some punk had urinated on the drivers seat, so I sat my tool box on the seat and opened the electrical panel just to the left of the steering wheel and found most the electrical wire insulation was pulled from the wires and made into a nest around the starter solenoid in the pannel. Then I noticed the smell from the piles of rat dropping in the electrical panel and knew the bus was infested with rats!
There was so much food left in buses from the children who ride them that these buses were infested with rats, lots of rat nests and droppings everywhere in the buses. The school maintenance guys I mentioned this to advised me the drivers do not clean the buses. I asked how often they hosed the buses out, and they told me never. These buses had so much rat urine in them, before we started installs, I drove my install team (4 of us total)  to a local Walmart, purchased  16 sets of coveralls, 4  for each of us, surgical gloves, disposable masks for spray paining, duct tape to wrap between the gloves and the coveralls and our boots and coveralls to limit the exposure to rodent dropping.
Each day we discarded the coveralls we were all wearing and the gloves and duct tape sealing them. All our clothing was stuffed into heavy duty trash bags and duct taped sealed for the trip home, just in case. I personally trashed all the clothes I had worn while working.
I have never seen the level of filth and disregard for child safety on a government school bus in 24 years. The children who rode these buses each day were exposed to an unbelievable level of rodent dropping, not to mention the actual rats that were constantly in the electrical panels I was working in.
I actually purchased a set of Nomex / Kevlar gauntlets normally used by jet fighter pilots just to protect my hands from possible biting rats should I encounter another install like this one.
Return to Gallery Page