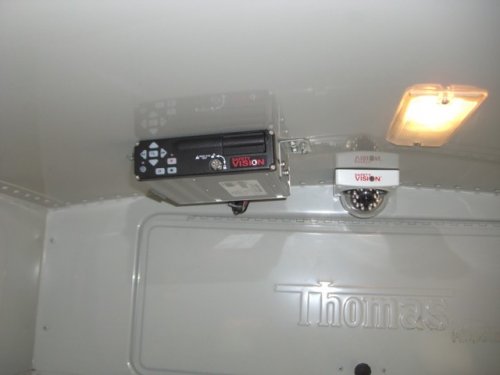 Another SV school bus video or vehicle camera systems mounted to permit full movement of the access door.  SV system, no matter how close you get the DVR to the wall you still must permit enough cable and wire access to connect to the DVR.  While this school bus camera or vehicle camera surveillance system DVR was small at the time it was produced it is now one of the largest DVRs on our Setup bench and in comparison to the new generation of the school bus video or vehicle camera systems DVRs now designated the "SD4m" mini series, which is now ability 1/4 the size of the discontinued IMC DVR.  Whether it involves school bus cameras, digital bus video cameras, vehicle camera, mobile video surveillance systems, digital in-car video camera, in-car camera, bus camera surveillance it is always best to invest in 100% Solid State digital like the SD4m or SD4 series, small DVR mountable under dash where it will not present a hazard to driver or children.
Return to Gallery Page